Sunday, a day of rest? Not in the world of eSports! The press have been active in churning out some good stories today, there is an interview with a caster, a new pro league and the results of the Armaggeddon Grand Slam, so why not sit back, relax and find out where to find out more about all these stories here on BattleAsia.

So lets get started! The Armaggeddon prize matches were played today and saw the climax of the tournament with the Singaporean team of First Departure defeating the Thai team, Awake in the LB final. This led them to face the Malay’s, ABC in the Grand final, despite already meeting in the tournament, the result was not to change. First Departure managed to take a game but lost the Bo3 2:1. Meaning ABC won the event, the $5,000 top prize and the $7,500 sponsorship prize. The remaining prize pool of $10,000 was shared between First Departure and Awake and the tournament showed a great success in supporting the DotA 2 scene. VoDs of the games and an interview with the winners can be found over at RaptureGaming, be sure to check it out! 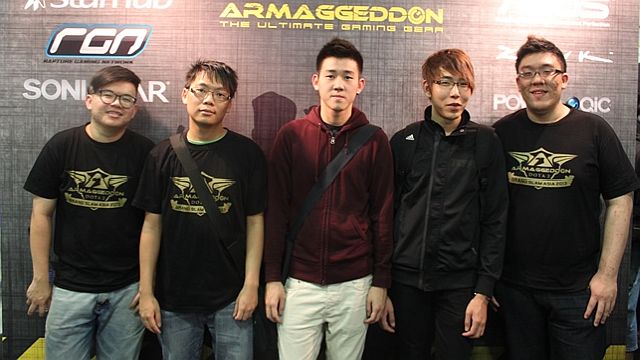 An interview has been conducted with Aaron ‘Ayesee’ Chambers with a discussion about all things shoutcasting. The interview is quite in depth and talks about the transition from Starcraft II to DotA 2, casting at The International event and plans for the future. The interview is a sentimental one as it is a year since Ayesee’s original interview with joinDOTA and he has seen lots of success since then. If you want an insight into the life of a shout caster it is worth checking this interview out!

Tomorrow sees the start of the SteelSeries Dotatalk Gold Cup which was open to all teams in Asia, the event is a qualifier for the SteelSeries Dotatalk championship and will commence from the 11-12th March. The 256 team tournament will see a prize pool of $150 and in game items but the real prize is for the top 4 finishers who will go on to the main event and the chance to compete for 1,000 euros of SteelSeries products. To check out the brackets follow the link. We will keep an eye on who manages to win this event!

A new Pro League has been announced by Netolic. The league will have an American/Europe region and a separate South East Asia region. The invite list for the SEA region includes Mineski, Vici Gaming, Rattlesnake and NeoES.Orange. The prize pool for the league is $1,000 per region plus equipment. Another four teams will be invited and the remaining eight for this sixteen team competition will come from a qualifier which is now open to sign ups! If you believe your team has what it takes to compete against the best and win a spot in this league. Sign up before the 16th March and compete on the 19th March and who knows, maybe you could take some of the $1,000 prize! For sign up information for the qualifier, follow this link!

Pleasure as always, and tomorrow we may have something special for you, bringing a look at an all female Thai HoN gaming team. We are excited and hope you guys are too!

there was a girl?

All the news in one place! Who won the G-League?

Next Post: All the news in one place! Who won the G-League?
Home RSS
Search