Welcome to the first edition of our daily news round up. We, at BattleAsia, are as passionate about eSports in South East Asia as you are! We know how important it is to keep up to date with the news surrounding your favorite teams. Therefore, with this new feature, we will provide a daily round up of the news which has caught our attention. So lets get started!

The sixth month old female Singapore team, Girlaxy seem to be going places, invited to play a showmatch at the Garena Star League at the end of the month in Bangkok, a tournament with $60,000 up for grabs. The girls will be facing WilloWy, a female Thai eSport team in a fight to the death over HoN! Rapturegaming managed to get an interview with aRies of Girlaxy expressing nerves over the match but delight about sampling Bangkok’s shopping! Read the full interview here. 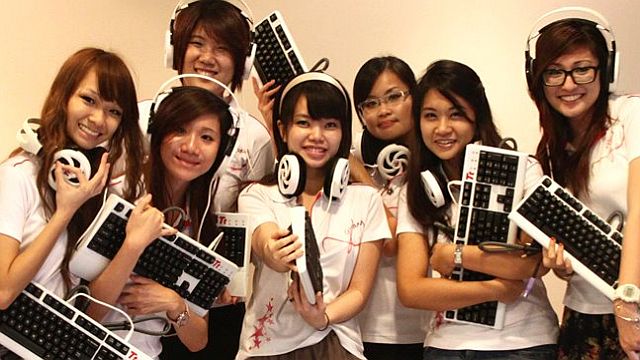 The Armaggeddon Grand Slam tournament in Singapore has concluded its second day. The chance to win a $20,000 prize pool and sponsorship for your DotA 2 team is not to be sniffed at! The action is streamed on TwitchTV and casted by David ‘Godz’ Parker so be sure to check it out! VoDs of the games so far can also be found here, it will be interesting to see who can take this tournament!

The Chinese distributor of DotA 2, Perfect World, along with the company responsible for the G-League, Gamefy have stunned the community by announcing that a 1,000,000 RMB tournament is on the way! The tournament is expected to kick off middle of the year, but details remain sketchy! The original announcement can be found here as well as some photos of the press conference, it is exciting times for Chinese gaming!

A mini interview has appeared with members of Invictus Gaming giving their thoughts on their busy schedule and upcoming tasks most notable the G-League final against LGD.Int which is tomorrow! Check out this short piece on youtube, it is in Chinese but luckily there are English subtitles!

And finally, changes in the Philippines as Mineski add Snoy and Kaigu to their LoL roster. After failing to win the last GMPGL championships, the management had to act and these two players were sought to helping the team get back to winning ways. There is an interview with the team manager, Arjay Orcasitas over on Mineski, it is well worth checking out!

Hope you enjoy having all the news in one place! Check back tomorrow for another round up!

Neolution.Orange starts 2013 with a bang by winning SEA League

It will take a little longer...